I'm still here.
In need of a break from FB and a place that's just mine to sit quiet and say whatever.  No "likes" or LOL's.

Still weaving on my loom and making pottery. Since last posting I've become the happy owner of a new kiln and wheel.  25 pounds of clay is heavier than it used to be.  And tieing up the treadles on the loom seems like the treadles are lower and harder to navigate.  No plans to quit.

29 years in the closet...these 2  watercolors came out again.  I'm not actually sure they are done but I can't do anymore to them.  I suppose that means that I am done even if they aren't. 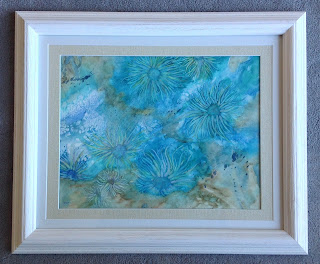 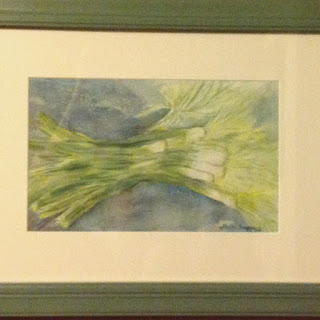 Posted by sheilabythebeach at 3:53 PM No comments:

Baby Wolf Loom and Me

I am getting to know her at last.  After watching the Deborah Chandler video where she warps a Baby Wolf I think I just may be able to do it!  Many years I've tried and failed in my weaving due to one thing or another.  Finally I see where I've gone wrong in many small and tiring ways.  Warping is no longer the long hard road it was...  It's still time consuming but not so painful.  Guess I'm not the self taught warping Wonder Woman I hoped to be!
Unable to upload photos right now, more to come.
Posted by sheilabythebeach at 6:14 PM No comments:

This lady has some incredible simple, straightforward, honest wall hangings that I fell in love with at the American Craft Council show recently at Fort Mason in San Francisco. I am inspired to try one of my own. I have this screaming yellow that I've been wondering what to do with. It will make a nice accent with grey I think.......I think.
Posted by sheilabythebeach at 5:37 PM No comments:

I Kinda Forgot About My Blog 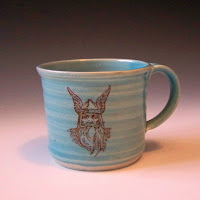 Been busy, been lazy, been bored, been sick, been well, been around the block all right.
Been thinking too much, sometimes not enough.
Who doesn't like Vikings?
Posted by sheilabythebeach at 2:36 PM 2 comments:

How I Made My Etsy NASA Space Craft 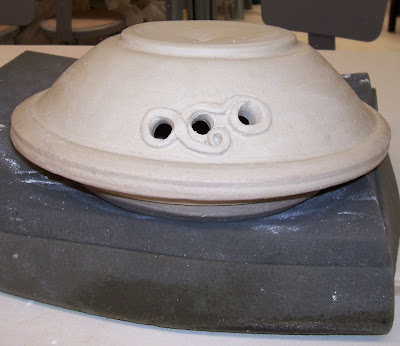 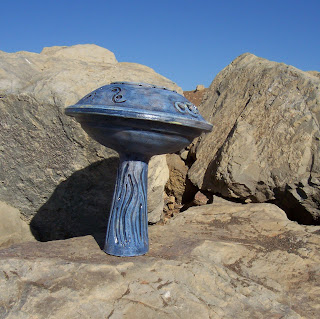 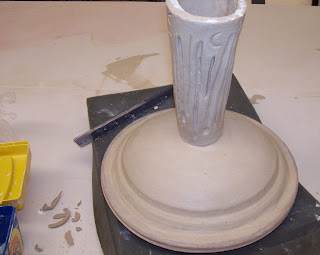 First I threw 1 large low bowl/platter shape using ? 4 pounds ? of clay. I used calipers and measured it and proceeded to throw another similar shape. Put aside, let dry slow. At the correct time they were trimmed; one at the foot creating a foot ring and the other was made smooth and flat. Then they were scored around the rim and slip was applied and they were joined rim to rim. Let dry a little more. I made designs by carving and I also made the holes so the space craft beings can see outside sometimes even though their navigation equipment takes care of them they must like to see out, huh? Then I added some clay around the windows to make them "pretty".

This form was covered and kept "leather hard". I made the leg; well, I really made 3 of them but they were waaaaay too huge so I used one only, the biggest one. The joined-together bowl/platter shapes were then joined to the big leg of the space craft. I continued to let it dry slowly and before the ship was completely dry I used blue underglaze and put it all over the craft, I mean everywhere I could reach, I put it on repeatedly to make a blue, blue, blue. And blue it was!
It dried slowly for a week or more before firing in the kiln. I placed it upside down to fire it which worked just great!
Next comes a layer of black underglaze applied all over. I wiped off the excess leaving the black in the crevices. Next a thin coat of clear glaze was applied everywhere except at the foot and it was fired again. Viola; my first space craft, I call her mama because she is the Mother Ship but her real name is Titan Trout I. I also made Big Daddy and Little Brat Space craft...they live outside so they can be free to roam as needed...

Posted by sheilabythebeach at 6:26 PM No comments: 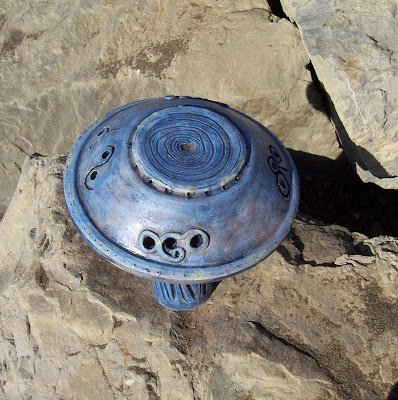 Pacifica Ground Control to Etsy NASA Space Craft, "We have you cleared for lift-off".
Just one more photo I took on that "Day" the sun came out on the coast!
Posted by sheilabythebeach at 12:48 PM No comments:

To The Moon and Beyond Halloween 2006 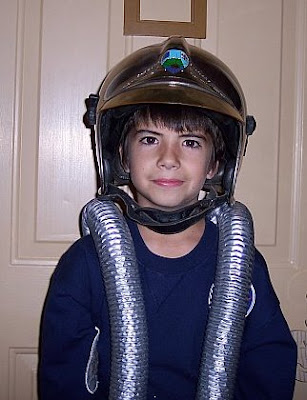 Fly me to the moon and let me play among the stars! Looks like this kid is ready to launch. Wouldn't that be fun? Still having a blast with the NASA ideas!
I like this entry also but I can't afford it...
I stopped in a yarn shop in Princeton, CA. today. There is nothing like looking at, touching and examining yarn in person. I couldn't resist making a small purchase...it's not like yarn, it's more like ribbon but it is extremely pretty and it called my name....
Posted by sheilabythebeach at 6:31 PM No comments: